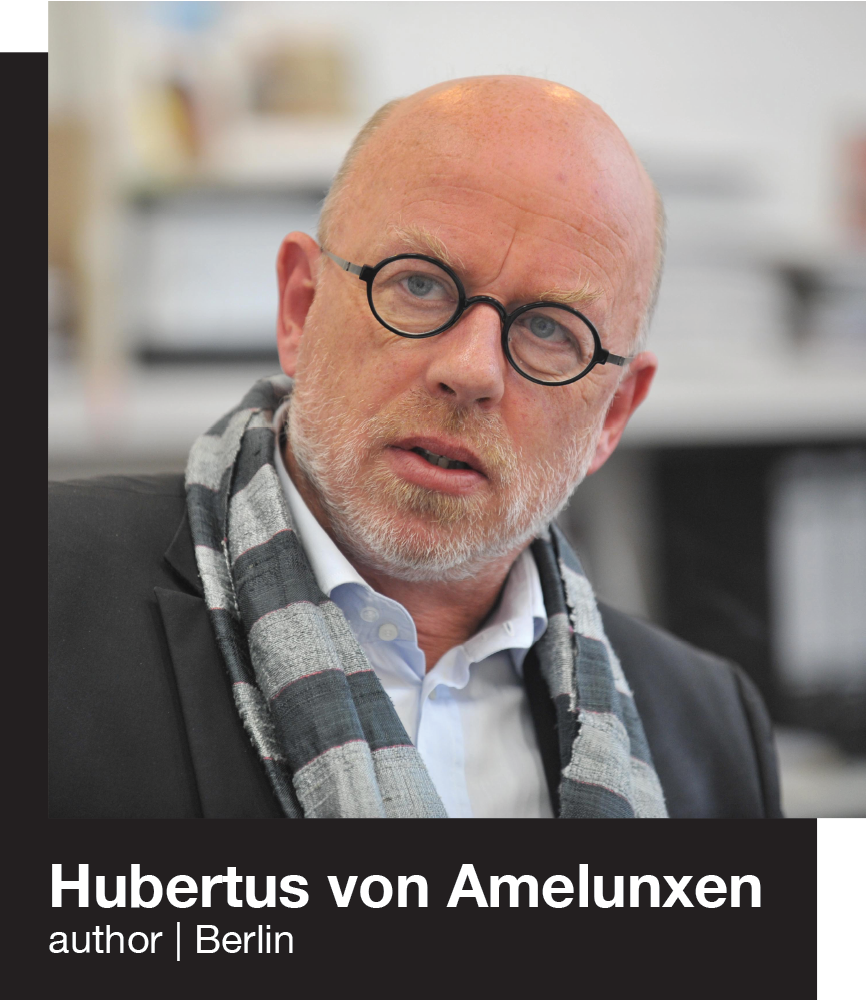 Hubertus von Amelunxen, Prof. Dr., is an author, curator, member of the Akademie der Künste in Berlin and from 2013 till 2018 the president of the European Graduate School in Saas Fee, Switzerland and Valletta, Malta. He lives in Berlin. After studying French literature, art history and philosophy in Marburg and Paris he was co-editor of the magazine Fotogeschichte from 1989 to 1994. From 1995 to 2000 he was professor of art history and cultural studies as well as the founder and director of the Forum for Interdisciplinary Project Studies at the Muthesius-Academy of Arts in Kiel.

During this time, he was a guest professor at institutions in Basel and Düsseldorf and in the History of Consciousness program at the University of California at Santa Cruz. From 2000 to 2007 he was the senior consultant curator at the Canadian Centre for Architecture in Montréal and from 2001 to 2005 the founder-director of and professor at the ISNM International School of New Media in Lübeck. Von Amelunxen was appointed a member of the Berlin Akademie der Künste in 2003. Since 2006 he has been the Walter Benjamin Chair at the European Graduate School in Saas Fee. From 2005 to 2009 he served as rector of the Ecole européenne supérieure de l’image in Angoulême and Poitiers, and from 2010 to 2013 he was president of the Hochschule für Bildende Künste in Braunschweig.

He is the author of numerous books and articles and a curator of international exhibitions, the most recent being Notation: Calculus and Form in the Arts of the 20th Century at the Akademie der Künste in Berlin and at the ZKM in Karlsruhe in 2008–09 (together with Dieter Appelt and Peter Weibel) and Cy Twombly: Photographs 1951–2010 at the BOZAR in Brussels in 2012. He is currently preparing the large exhibition Behind – On the Art of Looking Back.

Is art possible beyond culture? Do we conceive art as part of culture, in the very “heart of culture” (Hanna Arendt), at the origin of culture? Can art survive culture or can culture survive without art? The keynote will reflect on art and barbarism. From Walter Benjamin’s seventh theses on the Philosophy of History, stating that “there is no document of culture that is not at the same time a document of barbarism” to today’s fascist populism the work of art as a document of history must be thought of as well as an act of barbarism. Together with artworks by the Algerian artist Adel Abdessemed, the Lebanese artist Walid Raad and by the Hungarian writer Imre Kertész, the intricate relation between art and violence will lead us to the manifesto of politics of art.

In partnership with the Orient Institut in Beirut.